In our experience weed brushing does not damage a surface. 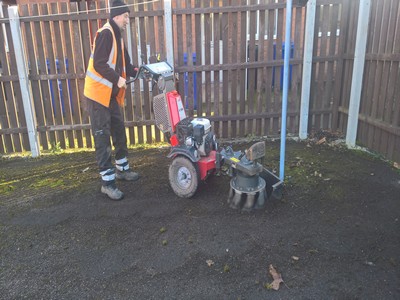 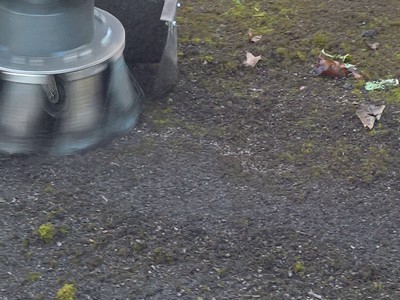 The above photographs demonstrate the typical results of lack of sweeping and other maintenance over several years.

The surface has probably been sprayed with herbicide many times.

This phenomenon often occurs in north facing, low traffic, shaded areas which is close to a wall/fence , hedge or tall vegetation.

These photos clearly depicts degradation of a tarmac surface due to freeze-thaw cycles .

Organic material collects in these places, breaks down and turns to soil.

This organic vegetation and soil harbours moisture and the moisture transports fine dust to small crevasses in the surface.

During periods of low temperatures the moisture contained in the dust freezes.

The science of freeze-thaw cycles and its effects are fairly simple. When water freezes at temperatures of less than 0 degrees Centigrade, it expands, technically referred to as volumetric expansion. This means that water wants about ten percent more space – 9.87 percent to be exact – when it goes from a liquid to a solid, frozen state. If that liquid water was in a crack or crevasse in pavement, it will push outward and, often, make the crack bigger. In tarmac this dislodges the aggregate from the tar binding. Each cycle dislodges more creating a broader and deeper crevasse.

The north face of a wall or under shrubs etc protects the surface from the sun retaining the frost for long periods of time and makes the surface less likely to dry out.

The damp surface attracts more dust in the air.

Now , when you finally sweep the surface or use a weed brush on the surface, the loose gravel which has been dislodged from the binding tar is swept away leaving crevasses on/in the surface.

This is all part of nature's erosion process, the weed brush/ sweeper reveals the damage and does not cause the damage.

Nature is fantastic. In the spring, the wind and rain transport seeds into these moist soil filled crevasses providing ideal conditions to germinate. As the season matures in to summer the moisture content of the simple crevasse reduces starving the plant of life giving water. The roots of the plant/weed penetrate any in perfections in the tarmac in an attempt to reach a reservoir or moisture further below the surface or across the surface to any source of moisture.

Prevention is better than cure. 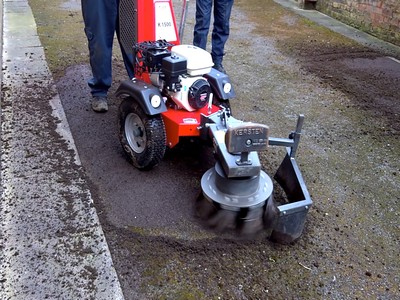 The above pictures shows a weed brush operating on a similar tarmac surface which has not yet succumbed to freeze/thaw. There is no evidence of damage to the surface. Furthermore the wall edges are constructed with impermeable paving slabs.

Just for completeness we must consider what happens when other weed control methods are used.

Spraying Herbicide, applying hot water, hot air, hot foam etc. These methods will all potentially kill the weed but they all leave the arisings in situ to decompose and continue the erosion process described above. The next seed that lands in this organic compost can thrive to be sprayed again and so the cycle continues.

Surely these methods and doing nothing are the cause of surface damage not the weed brush.

None of these exclusive processes are enough.

It must be every human's responsibility to maintain our built environment. It is nature's ability to turn it to dust.

The more we consider and work with nature, the easier the battle becomes.