The Integrated Alternative to Glyphosate

In a recent article about glyphosate use in councils; Horticulture Week proclaimed "Survey shows downward trend but no clear alternatives".

Although it's true that some of the councils surveyed had trialled individual alternatives with no clear successor to glyphosate. I think it also highlighted some councils who were successfully reducing the use of glyphosate through an integrated approach.

It's important to note that an integrated approach will use a range of tactics to reduce weeds, which might include the use of glyphosate. This will be especially common at the beginning of a Council's journey as they get used to the strengths and weaknesses of different tools in the integrated weed control arsenal.

The idea of integrated weed management is not to cease using glyphosate and pick one alternative to use instead.   Rather, it is to combine a range of preventative and remedial practices in the most effective way to maintain surfaces and reduce weeds. This inherently reduces the use of glyphosate, which is a remedial solution by taking appropriate choices that will prevent weeds emerging in the first place and make remedial work easier.  Once weed prevention has been implemented, other products can be used more effectively in a remedial capacity.

As indicated in the diagram below, Prevention is the underpinning principle of a successful integrated approach. 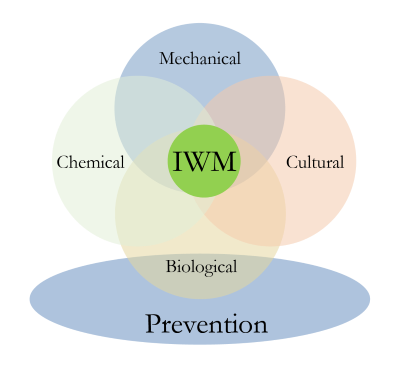 It is worth looking at some of the successes mentioned in the article in more detail to see where we can expand on this success.

For instance according to the article "Exeter City Council has reduced highway sprays from three to two per year. In 2020, it also introduced an integrated weed approach, using methods such as mechanical weed ripping and deep-clean teams".

Weed ripping is perhaps a misleading name.  A weed ripper removes the vegetation, but its main function is to remove the soil on a hard surface that the weed is growing in.  Removing the soil reduces the opportunity for new growth and restricts the types of weeds that can grow.  Thus reducing the need to apply glyphosate or anything else as a remedial treatment later in the season.  Deep clean teams will also be having an effect on the causes of weeds (the detritus build up and soil).

dealing with weeds in Exeter. We continue to reduce the chemical spraying,

with approved chemical spray. We also have a mechanical weed ripper that

will rip weeds out from hard surfaces and then removed by hand. We also

weeds in their street."

You can read more about their opt out scheme here;

These opt out schemes allow the council to focus their own efforts on fewer roads.  Permitting them to purchase a smaller quantity of new equipment while they are getting to grips with weed prevention and new remedial tactics.

Lewes is sharing resources with Eastbourne Council.  According to this article;

"Over the last year, the council has not used any chemical weed killers, including glyphosate, in any of its parks, open spaces or children's play areas.  This follows the adoption of a new policy in late 2019 aimed at ending the use of pesticides through a phased reduction."

"To help reduce weed growth in kerbs and significantly cut down on the need for pesticides, the council has increased its use of mechanical sweepers on roads from two to five rounds per year."  "In addition, the council's road sweeping operation has been increased by 45% since 2019."

This increase in weed prevention techniques including sweeping has allowed them to cut out most of it's glyphosate use, whilst also fulfilling its duty to keep highways free of detritus - using better cooperation between departments to tackle problems more effectively.  The reduced soil and detritus has made it possible to replace most remedial weed management with other methods such as Heat.

For more information on developing an integrated Weed Management plan check out our 4 step plan.

You can read the Horticulture Week Article here;